July 12.  Squamish was my favorite day of the 7-day BC Bike Race.

Not only did we wake up to stunning beauty, but there were little things like that fact that we didn’t have to pack up before the race, food was a short walk away, I had just had a massage the night before…

The day’s race started out hard for me.  My legs really didn’t want to work anymore and my mind was a little fried.  There was a fire road after the first aid station, I cried.  Don’t worry – I didn’t stop pedaling.  But I bawled my brains out.

10 minutes later… at the top of the hill, I was told “rollers and berms”… and then I hit Half Nelson, one of the jewels of Squamish.  Here’s a video (not mine) if you’re interested in the sweetness.

I was grinning ear to ear again, giggling like a little girl and shouting with excitement with my new riding friends.

In the end, I finished strong and the rest of the ride was premium single track.  EJ and I decided that if we have the opportunity to come back to Squamish to ride again – we’d do it.  No questions asked… it was that good of a day on the trail.

After the race, typical bike wash, bike drop off and shower… there were food trucks and a beer garden.  I had pretty much avoided beer during the race thus far, I just wasn’t up for it… but today – a cold one really hit the spot. 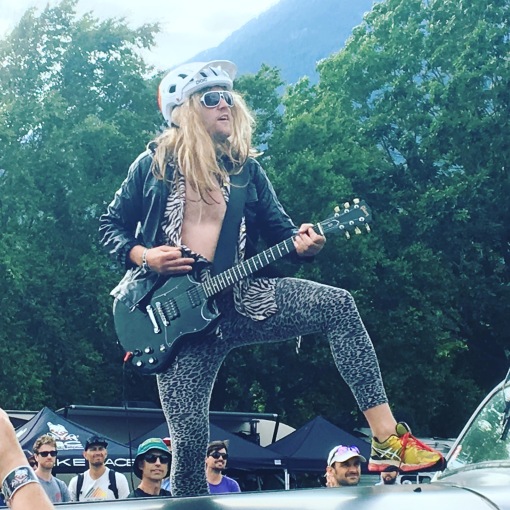 It was then that I came to the conclusion that BC Bike Race is adult mountain bike camp.  Loads of strange people that instantly become your friends, counselors that organize you from place to place and take care of ALL the logistics, shenanigans.

Tomorrow would be the last day of the race.  Ending in Whistler.  Parts of me couldn’t believe that my adventure was almost done – and I was starting to have mixed feelings.